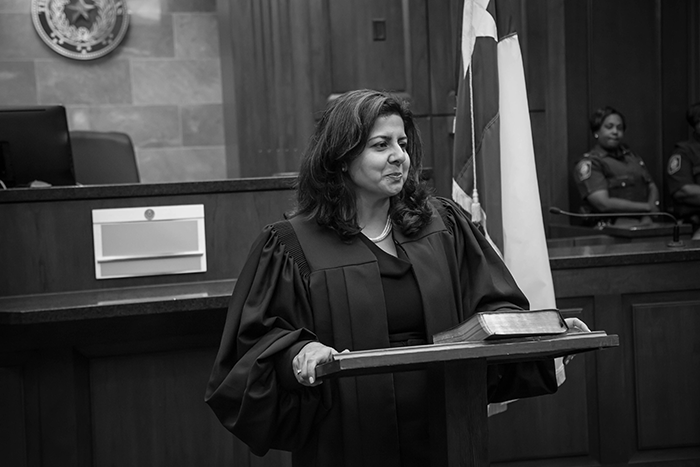 When Judge Stuti Patel (J.D. ’96) was sworn in as an associate district judge of Fort Bend County, Texas, in July 2015, she became both the youngest and the first Indian-American associate district judge in the district’s history. She served as assistant district attorney in Fort Bend County before becoming a judge, and also received a B.S.W. from the University at Texas in Austin. She lives in Sugar Land, Texas with her husband Hiren R. Patel (M.B.A. ’95) and two children.

LUNAR COUGAR: Why did you decide to apply to the UH Law Center?

JUDGE STUTI PATEL: When I was applying for law school, UH was a great option for me. For one, it is back near my hometown of Sugar Land, and secondly, it was affordable. It is a great value for the invaluable education you receive, and you’re not saddled with tons of private school loans!

Can you share one of your favorite UH memories?

I absolutely loved my time at the Law Center. One of my favorite memories was being a note-taker for two of our law students with disabilities. You have to remember, no cell phones back then. Yes, it’s true — we lived in such a universe! Some folks did have laptops but most of us actually took written notes during class. Anyhow, I would take my notes to the administration office after class, who would copy them for two other students. One of the students, who suffered from paralysis, became my best friend from law school.  He went on to graduate with both his MBA and law degree from UH.

Have you been back to campus recently, and have you stayed involved with UH since graduating?

I actually went recently with my youngest child to participate in the UH Engineering School’s STEM program for girls. I also had the opportunity to attend an alumni event in honor of Justice Ruby Kless Sondock (’62) recently held in downtown Houston. It was so inspirational to hear her speak. She was one of only five women in her law school class, and the first female justice on the Texas Supreme Court.

What has that transition from being an attorney to being a judge been like?

It’s a great experience and smooth transition. This November will be the 20 year anniversary of being granted my Texas bar license. For the majority of my years as an attorney, I was an assistant district attorney. Therefore, the transition to presiding over felonies was pretty smooth. I also preside over district court civil cases and property tax cases. Prior to taking the bench, I had a few years of civil law experience but not a tremendous amount. The transition to those areas of law has definitely been more challenging and a “learning curve” for me. Since my appointment to the bench in July of 2015, I have grown and gained significant experience in those areas.

What is your driving motivation for the work that you do, first as a lawyer and now as a judge?

It may seem cliché, but it’s very simple: to do the right thing and respect everyone. I sometimes say this to our inmates during magistrate docket (an arrested individual’s first appearance before a judge post-arrest), and I mean every word: “I don’t know if your case is going to get dismissed or whether you’ll receive probation or incarceration for life. However, it is my job to make sure that the process is handled correctly and legally at every stage that I am involved in.” We still have a duty, despite the horrendous charges someone is facing, to treat them with human dignity and to follow the law. They may have to pay a severe consequence for their actions, but that is a separate issue.

You majored in social work with a psychology minor for your undergraduate studies at UT Austin: how do the fields of social work and psychology factor into your role as judge?

In my role as judge, I use my social work degree more than my law degree! Who knew? I truly feel like the social work degree has been in amazing harmony with my law degree. If you have the right approach, respect, demeanor, then practicing or enforcing the law is much easier. Dealing with people, whether as part of a team or as a leader, is not an easy task. Having sensitivity combined with firmness is the perfect balance.

Did you always intend to study law after that, or did your course change along the way?

A law career was never on my horizon. I saw my future as a survivors’ rights advocate in the area of domestic violence or working on behalf of abused children. As an undergraduate, I had wonderful opportunities to work with pregnant teens, visually impaired students, child abuse and domestic violence survivors, parolees & their families, as well as incarcerated individuals. My course, or destiny, changed along with the way. Social work is an amazing field that I have great admiration and respect for. It is also a very fluid, long term process, in terms of working with your client, and I felt like I needed a little more finality in my work. After consultation with one of my undergraduate faculty advisors and professors, I decided to take the LSAT. I graduated with my B.S.W. and began law school at UHLC a few short months later.

Like many Americans, my perception of what a courtroom is like comes mainly from TV and movies. When you see a fictional scene, are there any aspects that are particularly irksome or unrealistic to someone who has spent so much time working in a courtroom?

I am a “Law & Order” junkie — just the “SVU” franchise. What cracks me up the most is when you see the police and district attorneys talking to the suspects so freely about the facts of their cases, whether their lawyer is there or not. That’s a rare reality!

What advice would you share with current or prospective UH students?

Study hard, be kind to everyone and put yourself out there. What I mean by the last comment is to network, and try to do volunteer work or internships. Even if you think a particular field is not for you, you could be very wrong. Try it out.