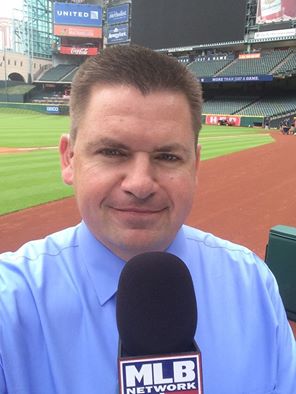 If you’re a fan of the Houston Astros, there’s a good chance you’re familiar with the work of Brian McTaggart (’95). McTaggart began working at the Houston Post in 1989 and has been covering Houston sports ever since. He served as the Astros beat writer from 2004 until 2009 when he began covering the team for MLB.com. His book, “100 Things Astros Fans Should Know & Do Before They Die,” was published in April, 2016.

LUNAR COUGAR: You’ve been covering sports in Houston since 1989 when you started working for the Houston Post, which was right around the time you were starting school at UH. When did you know that sports journalism was your calling?

BRIAN MCTAGGART: I went to UH with the hopes of becoming a baseball broadcaster, which is why I majored in radio/television. I had started a job doing grunt work in the sports department of the old Houston Post, and eventually started writing stories for the newspaper. Before I knew it, I was ahead of the curve when it came to print journalism and was getting way more practical experience writing than I was doing anything in broadcasting, so that became my focus. I sort of fell into it, I guess.

On game days, it’s an eight- or nine-hour day like most people. For a 7 o’clock game, I arrive at the ballpark usually by 3 p.m. and immediately go to the clubhouse (or locker room) to get the day’s starting lineup, talk to some players and eventually interview the manager in a group setting in the dugout. About that time, batting practice has started on the field, so I usually linger around batting practice for a bit talking to various people – front-office personnel, players, other reporters – looking for stories. From there, I go to the press box and typically write one or two short stories pregame. During the game, I’m tweeting like a mad man and keeping score. I’ll help write the game recap and then go back to the clubhouse after the game for reaction from the players and manager before writing a couple of more stories. For a typical three-hour game, I’m out of the ballpark between 11:30 and midnight – long after the fans and players have left. It’s a long day. 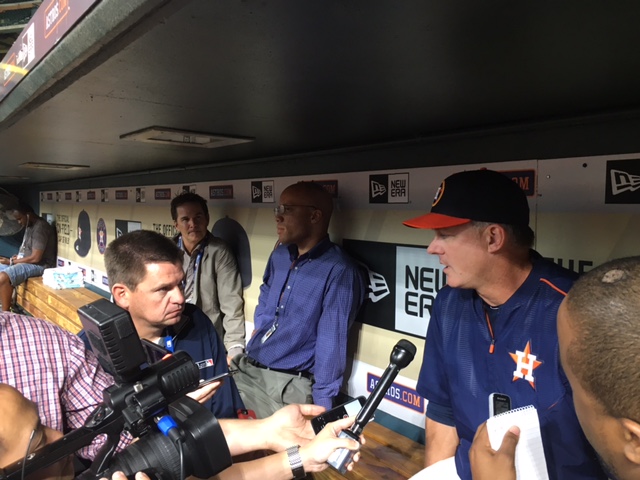 There have been numerous changes to what is expected of a sports writer from when you first started in 1989. From writing columns for print in a newspaper to now utilizing various mediums like social media, blogs, podcasts, etc… Is there anything that you would have never envisioned doing that’s now a regular part of your job?

Yes, the job is totally different. When I started, there was no internet, so being connected constantly is a big difference. I never would have imagined I’d be shooting video, but we’re big on video at MLB.com, so I shoot a lot of video with my iPhone to accompany my stories. Video adds a lot to the package. I never imagined I’d being doing that. Of course, the news cycle is immediate now. When I started, you’d have to wait until you saw the paper the next day to see what the competition had, but everything is put on Twitter now as soon as it happens, so that’s become a big part of our livelihood. You can’t wait on news. You have to get everything out as quickly as possible. It’s great to be first with a story, but being accurate is most important.

What do you enjoy most about your job?

What I like about baseball is that there’s something new every game – a new game, a new story. Most days, I come to the ballpark with a blank slate. I don’t know what I’m going to write, but it all comes together. You see things each night you didn’t see before. I enjoy the interaction with the players, as well. We get more access to players covering baseball than any other sport, so you get to know them and what makes them tick. You become a part of the fabric of the team if you’re around enough, especially when you’re on the road with them. You can’t get that in other sports. Of course, the travel can be fun at times, but it can also be a bear, especially late in the season and during the playoffs when you’ve been at it for seven months already. 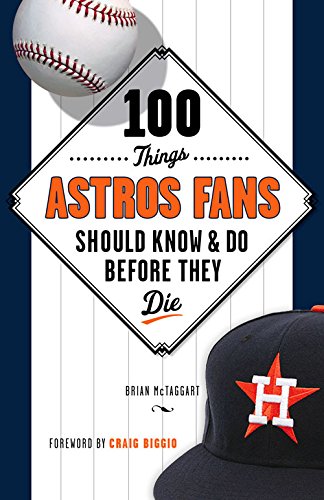 You have a new book out titled “100 Things Astros Fans Should Know & Do Before They Die.” Tell us a little about the book.

The book is sort of an encyclopedia of Astros knowledge. It’s 100 chapters of 100 different events, players, moments, games and things that every Astros fans should know. There are a few chapters on things Astros fans should do, but mostly it’s about Astros history, beginning from the start of the franchise through last year’s playoff run. The chapters range from anything about former players, the Astrodome, the scoreboard, Tal’s Hill, rainbow uniforms, you name it. I interviewed about 50 people for the book, mostly former players, and learned a lot. I knew many of the stories, but was able to get some backstories as well as learn new stuff that was revealing. The book is an easy read, but if you’re an Astros who’s new to the game or one who’s been around 50 years, there’s stuff in there you’ll like. It was a fun project.

What brought you to UH as a student? Was there a defining factor that led to you enrolling?

I grew up in Pasadena, not far away, and was a huge UH sports fans growing up. I cried when the Cougars lost to Notre Dame in the 1979 Cotton Bowl and when N.C. State beat us on the dunk to win the 1983 NCAA Championship. I’m still not over it. I actually intended to attend Sam Houston State University and went there for orientation, but decided I want to stay closer to home. I wanted to go to UH. I started at San Jacinto Community College before finding my way to UH. I think I was always meant to be there. It felt like home.

How did you time at UH prepare you for your career?

I was fortunate in that I had already had an extensive amount of stories published in the Houston Post before I even took a print journalism class, so I always felt like I was ahead of the curve in that respect. Really, attending UH exposed me to people of all cultures and backgrounds that I didn’t get while growing up. I had never really been out of Pasadena, and though it’s not a far drive from campus, UH felt like a different world, a melting pot. I had to learn how to interact and find my place.

Did you have a favorite professor or class that stands out to you from your time at UH? Perhaps a favorite memory?

I succinctly remember sitting in one of my early writing classes taught by Campbell Titchener and trying to keep my head down and be quiet. Little did I know, he had been aware of my work at the Houston Post and made the connection and singled me out early on in front of the class. It was a tad embarrassing, but I felt fortunate because I had a leg up on the others in the class because of my experience at the newspaper.

What advice would you share with prospective or current UH students and journalists?

Journalism has changed so much since I went to UH, I don’t know how they’re being taught to survive in that field these days. It gets tougher and tougher. With any profession, and I think it still remains true with journalism, you have to be willing to pay your dues. You have to start at the bottom, get as much practical experience as you can, even if you don’t get paid much or at all. But I think networking is vital. Knowing people who can help you down the line and being good enough to take advantage of any opportunities those connections lead to is the key. Put yourself in the best position for when that opportunity comes.