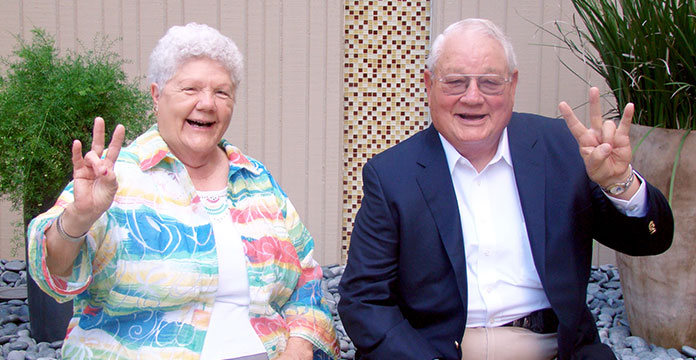 Jack Miles (’62) has a file drawer in which he keeps all of the letters he’s received over the years from grateful teachHOUSTON scholarship recipients. He is excited about their future plans, tenacity, and “gumption.” These students don’t necessarily have to have the highest grades or tread the traditional college path, according to Jack and his sister Diana Miles, trustees of the Elizabeth P. and Harold R. Williams Foundation, but they do have to have goals and the resolve to move into a challenging and vital career in education. When asked what makes a perfect teachHOUSTON scholar, Diana quickly answers, “Determination.”

The Williams Foundation’s teachHOUSTON endowment supports University of Houston undergraduate students who are studying to become high school math and science teachers. It places them in real-life classrooms during every undergraduate year, instead of just one year of student teaching, and helps them garner enthusiasm for the challenge of teaching high school math and science.

For Jack and Diana, acknowledging the value of a UH education has always been a family affair. In fact, at one time during the 1950s, five members of their family were attending the University of Houston at the same time! Their aunt and uncle, Harold and Elizabeth Williams, established the Williams Foundation, and Jack and Diana became Trustees when their aunt and uncle passed away. “Uncle Harold pushed us as far as education was concerned, and we want to be there to support the next generation,” says Jack. “Oftentimes, students today don’t have someone pushing them.” And a push in the right direction is sometimes all it takes.

Putting a UH Education to Work

As business majors at the University of Houston, both Jack and Diana learned many valuable lessons. Jack was a nontraditional student who took classes at night. This meant he was taught by many industry professionals whose classes were in the evenings.

After graduating from UH, Diana went on to teach high school business classes in Spring Branch ISD. Her 30-year tenure at the school district brought with it a changing demographic of student and interesting challenges, improving math and science scores being one of them. She also holds a position as a city councilwoman in Rosebud, Texas, a role she hadn’t anticipated playing, but which makes perfect sense after the long time she spent serving the community as a teacher.

Jack, on the other hand, was always aware of what he wanted to do, and that was run a company. However, he had not necessarily seen himself as what he also became — a rancher. Since around 2001, he has been the co-owner of the Brazos River Cattle Company, a working ranch between Temple and Waco. The only regret he has is that he didn’t take an agriculture class while at UH. Above and beyond their careers, both Diana and Jack’s passion is supporting education, and the University of Houston provided them the perfect outlet for the Williams Foundation’s philanthropy.

Diana Miles says, “Math is a logical science and hard to teach. It’s not a soft science. The answers are the answers.” Jack Miles muses, “A lot of kids in our society are coddled. Can they balance a checkbook? You don’t have any real life skills if you can’t do math!” Quality math and science teachers are what teachHOUSTON is intent on providing to the community. Houston benefits greatly, as 75 percent of teachHOUSTON graduates go on to teach in high-need high schools in the Greater Houston Area.

Jack balks at the notion that teachers are the only ones responsible for encouraging and helping students succeed, though; he holds the parents responsible, as well. Most teachers are underpaid and this fact, coupled with the lack of engagement on some parents’ ends, results in a lot of students “falling through the cracks.” The Foundation’s endowment – a partnership between the College of Education and the College of Natural Sciences and Mathematics – is making sure students have the math and science skills they need to succeed by providing much needed support to the teachers of those subjects.

The Determination to Make a Difference

So, why the University of Houston? “This younger generation will make the decisions for us as we grow older,” Jack says. “I want them to have the best education possible!” They know, firsthand, that teachHouston students’ education will be stellar, and that these future professionals are already shaping Houston’s next generation of decision-makers and innovators. This family of alums is proud and eager to give back to the University that launched their careers and taught them a lot about life, as well. Whether considering teachHouston students, the teachers-in-training at UH or the Miles siblings’ own experiences, Jack perhaps sums it up best: “Life is continuing education.”