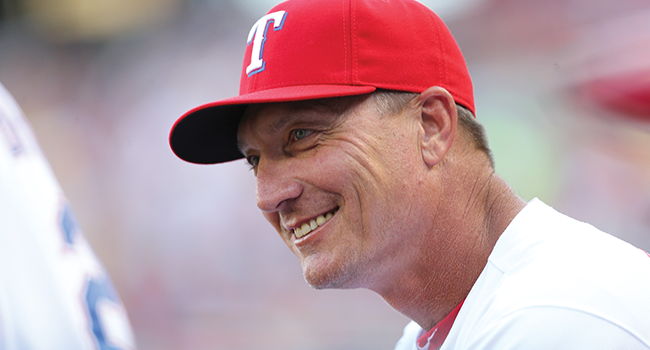 Tough guys don’t cry. But they’re allowed to get a little misty-eyed once in a while. Case in point: Jeffrey Banister (FS ’86), the manager of the Texas Rangers, has toughed it out through a heaping helping of adversity in his life. But when he was recognized as an exceptional University of Houston alumnus at Globe Life Park in Arlington on April 28, he swelled with pride and gratitude for his alma mater.

“I didn’t cry,” he says, “but it warmed my heart to put the red and white back on again. It was exciting to be honored by my school and the Alumni Association, and to do it while standing on my home field for the Rangers. But then, I feel that way every day. It’s SOP (standard operating procedure) for me.”

“I enjoy being a UH alumnus. The older I get, the more nostalgic about the school I get, especially when I think back on all the friendships I’ve made there and the deep bonds I have. In my heart, UH is a place that continues to shine.”

Today, Banister is in his office at the stadium and it’s about six hours before game time. Tonight, the Rangers will take on their cross-state rivals, the Houston Astros. As Banister speaks to a reporter on his cell phone, he gazes at the lineup card on his desk and begins figuring out which of his hitters match up best against the ’Stros’ pitcher. Occasionally he glances up at the TV, anticipating the announcement that the Rangers have traded for All-Star pitcher Cole Hamels, who is being pursued by a half-dozen other teams.

“I enjoy being a UH alumnus,” he says, then flashes a smile and chuckles quietly. “The older I get, the more nostalgic about the school I get, especially when I think back on all the friendships I’ve made there and the deep bonds I have. In my heart, UH is a place that continues to shine.”

The deepest heart bond he made at school was with Karen, who at the time was a member of the Dance Team. He met the future Mrs. Banister in the TV room of the Athletic Center, and when he first looked into her eyes, he felt his heart was going, going, gone!

“We also had a kinesiology class together,” he says. “We started studying together, then spent lots of time together. And we’ve been together now 30 years.” Karen is a high school teacher, and the couple has two children.

“I feel like I’m the luckiest guy on the planet,” Banister adds. “Every day is a gift. Every morning, when I put my feet on the floor, I thank God I’m allowed to continue for another day. When I think about the things I’ve gone through, I feel like saying thank you to all the people who’ve helped me along the way.”

Indeed, Banister has a lot to be thankful for – not just to the coaches at UH who helped shape him as a player and a manager but to his parents and the doctors who helped him beat cancer and a severe spinal injury that could’ve crippled him for life.

While playing baseball as a sophomore at La Marque High School (La Marque, Texas), Banister twisted his right ankle, and during the examination, doctors found bone cancer. They recommended amputation to save the leg, which Banister refused.

“I don’t think I knew enough about what was going on to be as fearful as I should’ve been in that situation,” Banister remembers. “But I had a Superman mentality and was convinced I was invulnerable. I had greater plans for myself, and the determination that I was going to be a Major League ballplayer helped me get through some pretty dark days.”

It took several operations to save the leg and physical therapy to get him back to the diamond again. In his senior year, a knee injury playing football limited his ability to play the infield; he switched positions and became a catcher. Then, while playing baseball at Lee College (Baytown, Texas) in 1983, he injured his neck in a home plate collision and broke three vertebrae. He was paralyzed for 10 days, and doctors warned him that he may never walk again. But again Banister battled back, undergoing several spine operations, and he learned to walk again. Two years later, Banister was playing for Lee College and was named a Junior College All-American.

In 1986, he transferred to Houston to play for the Cougars on a baseball scholarship. The coaches taught him lessons about baseball and life that he continues to carry with him.

“Rolan Walton was the Cougars’ coach at the time. He and the other coaches taught us the importance of bringing trust, faith, integrity and dependability to the total team. Those are the qualities every coach should instill in his players, and I’ve tried to do the same when I became a coach.”

From Pirate to Ranger

Banister was drafted by the Pittsburgh Pirates in 1986, and played seven seasons in the organization’s minor league system. He appeared in one Major League game in 1991, as a pinch hitter.

“Walking to home plate for the first time in a Major League stadium, I was emotional and excited,” he says. “I looked out at the pitcher and time seemed to slow down and pause for me. I didn’t even hear the crowd cheering. I was finally a Major Leaguer. Part of me wanted to scream out the names of all the people who helped me get to this spot.”

He recorded a hit in that at-bat, and then was sent back to the minors after the game – becoming just one of 15 players in the history of the sport to get a hit in his only plate appearance.

“I like to think I was so good, they kicked me out,” he says with a laugh.

He retired from playing in 1993, but stayed with the Pirates, becoming a minor league coach, then a manager, and in 2010 joined the Major League team as a bench coach. In October 2014, he was named manager of the Texas Rangers.

Banister looks out the door in his office and into the locker room, where players are beginning to suit up for warmup drills in preparation of the night’s game. He smiles and says, “The most fun part of managing is when I get to see grown men turn into 13- and 12-year-olds. It’s fun watching them celebrate around home plate after someone hits a game-winning hit or a walk-off homerun. The sheer excitement and joy they feel. I live for that.”