Cougar Pride is a Family Affair 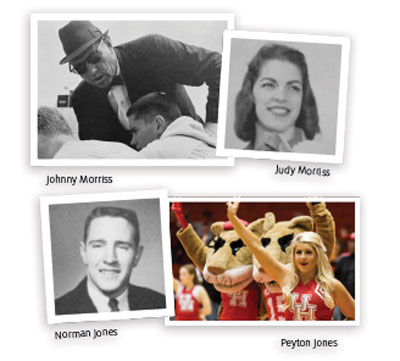 Cougar red runs deep in the Jones-Morriss family, from 1955 to today! Johnny Morriss was UH’s track and field and cross-country coach from 1955 to 1975, and his teams excelled at the sport, with a NCAA national championship in 1960. His daughter JUDY (FS ’61) was a Coog cheerleader and married NORMAN JONES (’62), and his son JOHN W. MORRISS III (’69) was a varsity letterman under his dad, and later became a coach. Now, PEYTON JONES (’18) has followed in their footsteps — and those of her maternal grandmother, RAE DAUGHERTY (’77), and father, former student CRAIG JONES, who received a golf scholarship from UH. She studies communications, and has been a cheerleader for her entire UH tenure so far.

LEROY DREYER (’54), has been selected to join the American Baseball Coaches Association Hall of Fame as part of the class of 2017.

DON MULLINS (’62) played in the NFL for the Chicago Bears in the 1960’s. After his football career, he returned to Houston and worked in real estate for over 50 years. Although officially retired, it’s not uncommon to find him in the office at least a few days per week. He is also still involved with his alma mater, both in athletics and the clinical psychology department.

J. ARLY NELSON (’65, M.S. ’66), is the author and co-author of several books and publications, including “James Arly Nelson Collection of Howard Skipper Manuscripts and other materials,” “Advances in Chromatography, Vol. 15,” and “Proceedings of the Society for Experimental Biology and Medicine.”

DALE COLE (’67, O.D. ’69), practiced optometry for 35 years. He is now retired and spends his time as a photographer. He and his wife, Beverly, celebrated their 50th anniversary this past July.

JOSÉ LUIS FLOTTÉ (’74) worked in the health care field for more than 40 years, climbing his way from staff accountant to Chief Executive Officer of various Houston and surrounding area hospitals. He is now going into business consultation.

DAVID D. SCHEIN (J.D. ’77), the director of graduate programs at the Cameron School of Business at the University of St. Thomas, has been promoted to Associate Professor.

JIM NANTZ (’81) was selected as a Lifetime Achievement honoree by the Golf Coaches Association of America.

THE HONORABLE DANIEL O. WONG (’83, M.S.C.E. ’85, Ph.D. ’88), started Tolunay-Wong Engineers, Inc. (TWE) in 1993 and is currently CEO of the company. Wong is a licensed professional engineer in Texas, Oklahoma, Florida, and Louisiana. He was appointed in 2006 by Governor Rick Perry to the Texas Board of Professional Engineers, where he currently serves.

D’JUANA PARKS (J.D. ’90), was named Beaumont’s top lawyer for plaintiff’s personal injury cases and is one of 13 attorneys from Beaumont’s Provost Umphrey Law Firm, L.L.P. who were named among the country’s best by The Best Lawyers in America.

GREG DEATKINE (’92, M.B.A. ’98), is the President and CEO of Platinum Dermatology Partners, a comprehensive physician management services organization. DeAtkine most recently served as COO at U.S. Anesthesia Partners, where he was on the founding team that grew the company to a network of more than 2,000 providers.

ALBERT L. CHENG (’93), was appointed by Governor Greg Abbott to the Texas Board of Professional Engineers as a public member. The TBPE licenses qualified engineers and regulates the practice of professional engineering. Albert’s late father, SAMUEL K. CHENG (’68), was a civil/structural engineer who worked for over 43 years in the Houston petro-chemical complex.

GAY NORD (’94), was named the new president of Baylor St. Luke’s Medical Center in August. She was previously the president and CEO of Methodist Hospital in San Antonio for 5 years.

BRUCE A. WILLIAMSON (M.B.A. ’95) was appointed Executive Chairman of the Board of Southcross Holdings in Dallas, Texas. He has been in the energy business for more than 35 years.

CYNDI BARNETT (’97) is a financial consultant who recently became certified as a divorce financial analyst. She opened her business, GPS Wealth Management, in 2010 to help people manage their wealth related to issues such as divorce, catastrophic events, education funding, retirement, and long- and short-term tax strategies.

Councilwoman PREBBLE RAMSWELL (’99, ’02) was named mayor pro tem for the city of Destin, Fla. in March 2016. In May, she completed her Ph.D. in Political Science at Southern Missouri University, and she has already received two publishing offers to turn her dissertation “Millennial Fascism: The Rise of Euroscepticism” into a book.

TERRY KIDD (’01, M.S. ’02, M.Ed. ’03) was honored as a recipient of the prestigious 2016 Houston Business Journal 40 Under 40 Award. Dr. Kidd also received the 2016 Outstanding Alumni – Early Career Award from Texas A&M for his dedication and efforts in workforce development. He is currently Dean of the Division of Extended Learning at Houston Community College.

Karen Hartemink (M.B.A. ’04), Bauer College Alumni Association Board Member (2005-2009), and her husband Dr. Menno Hartemink, UH Petroleum Engineering Advisory Board Member, announce the graduation of their son from Phillips Academy Andover, a New England boarding school in Andover, Massachusetts. He will attend the University of Oxford in the fall of 2017. The Harteminks have four children, age 21, 18, 14 and 5. Their eldest daughter graduated from Phillips Academy Andover in 2014, and is currently a student at Rice University.

MARLA QUINTANA (’05) and her husband LUCAS QUINTANA (’13) produced a film called “The Vessel,” a seven-year project of the couple shot in two languages — English and Spanish versions. The New York Times wrote that the film, which also stars Mr. Quintana, displays “exquisite visual acumen” and the Los Angeles Times says that it was “one mind-trip worth taking.”

VERONICA MARTINEZ (’06) worked as a Community Mortgage Lender for Whitney Bank for four years and is now a Senior Staffing Consultant and Mortgage Recruiter at BBVA Compass. She recently shared tips on how to be money-ready for hurricane season on the Houston Public Media News 88.7’s Bauer Business Focus.

ALEX B. ROBERTS (’02, J.D. ’06) was named to Benchmark Litigation’s “Under 40 Hot List.” Through a process of peer review and case examination, this list was compiled over a period of many months to assemble this collection of young, up-and-coming attorneys.

KARL WOLPERT (’08) has been promoted to tax manager at Weinstein Spira. He has been with the firm since 2008.

TRENTON HALTOM (M.A. ’15), is now a Sociology doctorate student at the University of Nebraska-Lincoln and is one of only three male baton twirlers in the university’s history.

HARIDEEP KALAVEENA (M.I.E. ’14), and MARA MARTINEZ (M.S. ’15), are the founders of a tea subscription service startup in Houston called Story of My Tea. They believe tea is an art and want drinkers to connect with that art. Teas from different regions of the world are delivered to their customers on a monthly basis, and an app will be provided for users to record and track their favorite teas.

TED W. EVANS (J.D. ’16), and LISA L. VIRGEN (J.D. ’16), received highly competitive Equal Justice Works fellowships, two of only 45 nationally. The two-year fellowship will allow Evans to work for Disability Rights Texas with the sponsorship of Sutherland Asbill & Brennan and the Texas Access to Justice Foundation, while Virgen will work with Lone Star Legal Aid with the sponsorship of BP and the Vorys, Sater, Seymour and Pease law firm.

Cougars Throughout the Nation

Are you a “Forever Coog,” but you now live outside Houston? Have you thought about starting a UHAA chapter in your town? Maybe you want to organize a watch party for an upcoming football game or book a speaker to talk about all the great changes taking place at your alma mater? Read on to see how these fellow Cougars have brought UH spirit to their cities across the U.S.! Please contact Daniel Gray, at djgray@uh.edu, to learn more about how you can find UH alumni in your area.

“President Khator hosted a reception in downtown Dallas recently — it was a wonderful event that gave a wide range of area alumni a chance to network and hear about the University’s successes.” 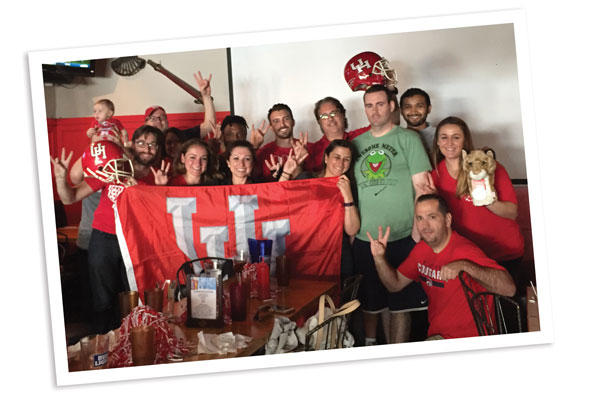 “Living in New York becomes its own bubble, and it’s nice to feel connected to home, and to other Texans or people who spent time in Texas. Plus, no matter how much time has passed, UH and its traditions live on!”

“We have more than 750 alumni in the Phoenix area. Our loyal and enthusiastic alumni group held a watch party on November 17 for UH’s exciting win against Louisville! We met at a local Texas barbeque place that even served Shiner beer! Our next planned event is a road trip to Tucson on September 9, to watch the Coogs play the University of Arizona. I am so impressed with the emergence of UH into an international powerhouse.”

“There’s nothing like Cougar football to draw alumni together! I believe you pick a university for life, not just for a degree. Another school is not allowed to replace UH in my heart and soul … even for a moment!”

“We have watch parties for every football game in downtown Denver. We always have a good turnout with locals and those visiting the city from out of town. It’s great to stay connected with UH especially when not living in Houston because of the pride you carry after graduating.”