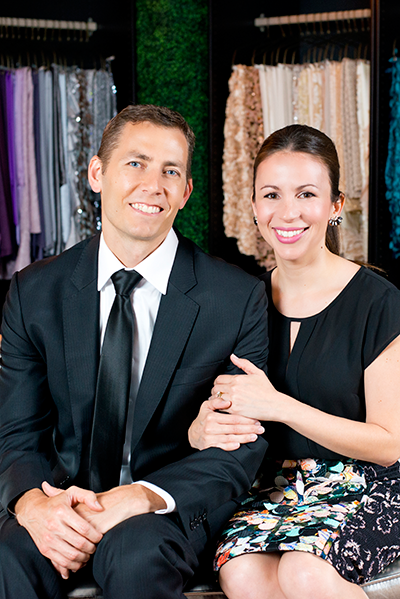 The Heights office and showroom for Over the Top Linen may look nondescript from the outside — few windows, tan walls, carved into a residential street — but a vibrant array of fabrics in myriad textures and hues waits inside, topped by a rainbow-ribbon chandelier and helmed by strong Cougar leadership. “We don’t explicitly try to hire people from UH, but there are so many talented graduates in the community, it often works out that way,” said CEO Clara Hough (’02) with a smile.

Clara founded the specialty linen service in 2005 with her husband, managing partner Christopher Hough (’00), whom she met when they were both students at the Honors College and Bauer College of Business. Christopher is also Director of Finance and Accounting at Ascent Automotive Group, using evenings and weekends to strategize accounting and finance operations and help organize events for the family’s business. Their work hasn’t gone unnoticed: Over the Top has received numerous accolades over the years, including, in 2014, ranking as one of the Cougar 100 list of fastest-growing Cougar-owned or led businesses and the Houston Business Journal naming Clara as one of their 40 Under 40 honorees. Additionally, Clara was named an honorary alumna of the Conrad N. Hilton College of Hotel and Restaurant Management in April 2015. Besides investing in the Houston community with their business and through several charities, the Houghs have also established the Christopher and Clara Hough Annual Scholarship at the Hilton College to afford exceptional students the same opportunities they received at UH.

For Clara, attending the University is synonymous with her experience of becoming an American. She lived in Venezuela until the age of 17, but her grandfather owned an oil and gas business is Venezuela and lived in Houston for a long time. “My parents always wanted us to receive our education here,” Clara said. “It meant so much to me to come to UH. Being here prepared me for life in a different country.” Her three sisters, Cristal Ordonez (’03), Alba Villegas (’04) and Aurora Pisana (’10) all hold UH degrees. When they arrived, however, the first challenge was to learn English. After completing a course at the UH Language and Cultural Center, Clara intended to pursue a degree in chemical engineering, it being one of Venezuela’s core industries and an expected concentration for students, but was drawn to business and marketing. “I wasn’t familiar with the concept of business as an area of study, but when my sister Cristal began studying at Bauer, it inspired me to change my course.”

Christopher moved from Colorado to attend UH and had a similar unfamiliarity with what a business major entailed. He had intended to study computer science, but changed his mind after a lecture in his introductory accounting course by Dr. Gary Schugart. “Something just clicked. I’m not sure what exactly did it, but that course put everything in perspective,” he recalled. Both Christopher and Clara made an effort to form strong relationships with professors and other students, seizing as many opportunities as possible. “There are so many organizations and ways to get involved,” said Christopher. “The connections and relationships – you can’t put a value on that.”

Clara worked as a catering manager after graduating in 2002, building her customer service skills and gaining an insider view of the hospitality industry. “I’ve always loved the design aspect of an event, the colors and textures. The right linens can transform the entire feeling of a room,” she said. “As a catering manager, I saw what people wanted for their special events, as well as aspects that could be improved. Having the right linens can make a significant difference for any event.” She estimates that around 70 percent of their events are weddings, but the scope spans all social occasions, including galas and fundraisers — they have even provided linens for a baby shower. Christopher noted that even though events require careful planning and execution, the events are typically happy ones, which makes the effort less arduous and more rewarding. Clara agreed, which is not surprising, given the quote displayed above her desk: “Find a job you love and you’ll never have to work a day in your life.” Hard work is important, but the Houghs know that passion is equally important. “When starting your own business, you have to combine passion and opportunity,” Clara said.

The opportunity was certainly there – Over the Top is one of few companies of its kind in the Houston area, and their business has steadily grown over the years. The success hasn’t come without challenges, though: “People have said that I get more emergency calls at odd hours than a heart surgeon,” Clara laughed. “But it’s important for us to recognize that even though we work events all the time, it’s a special day for our clients — a once-in-a-lifetime moment. We want to make everything memorable and as stress-free as possible for them.” Not to mention, founding the company fell in the same time frame as the birth of their daughter, Mia. Their son Christian was born a few years later, and the Hough family now resides in Katy. Christopher attributes the continued success of Over the Top to Clara’s building strong relationships with their partnering venues, using their individual public relations and accounting skills cooperatively and planning smart growth. “It’s important for businesses to decide at what rate they want to grow. We often see businesses that grow too quickly, and then the process is unsustainable,” he said. Accordingly, Over the Top started small — out of the couple’s house — and graduated to larger facilities and clientele over the years.

The Houghs decided to establish the Christopher and Clara Hough Annual Scholarship at the Hilton College because they believe in the talents and potential of UH students. Besides working with UH alumni on a daily basis, Clara also works closely with the Houston chapter of National Association of Catering and Events (NACE) and the NACE student chapter on campus. “I’m constantly impressed by the students that I work with. We’ve formed great relationships over the years,” she said. Christopher agreed: “I don’t think there’s anything as important as educating young people. We want to contribute to them — we know that will make us better off as a society.” The most compelling reason to give, however, may be that scholarships made a tremendous impact for them both as out-of-state and international students. “We’ve been blessed,” said Christopher, “and we feel that we have the responsibility to share that with others.”