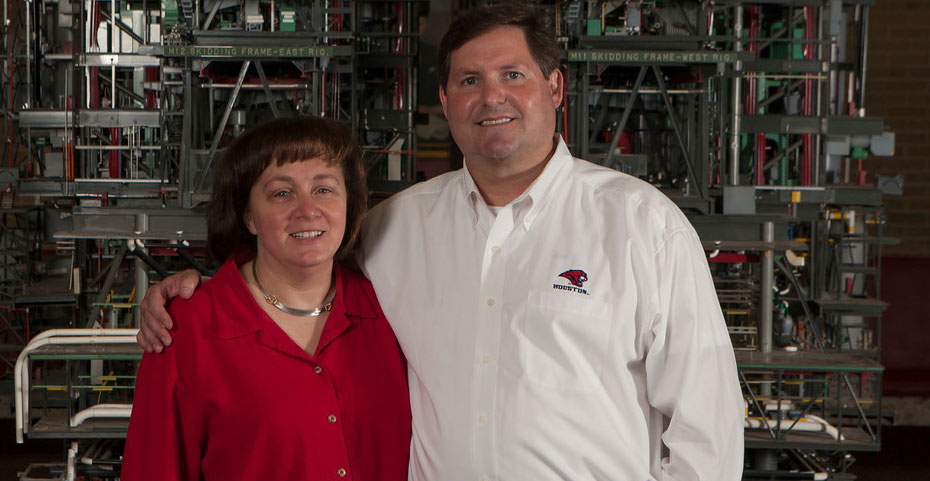 The Cougar Graduation Challenge is an exciting way for University of Houston students to give back before they even graduate.

The Cougar Graduation Challenge is an exciting way for University of Houston students to give back before they even graduate. It also helps create a sense of community among students. The Challenge has two components—the Cougar Spirit Cord and the Cougar Graduation Survey. By making a minimum $15 donation to the University of Houston, graduates receive a red and white Cougar Spirit Cord to wear at commencement. This shows a student’s pride in their school and their support for those who will be returning the next semester. But if that donation seems too daunting, Phil Swanson (’86) has agreed to let every student who completes a Cougar Graduation Survey direct one dollar to the UH program of their choice. Swanson understands that the pressures of life and the costs of living can outweigh the desire to give back—especially for new graduates. One dollar, directed to any college or program in the University, is what he considers a “launch pad” for giving. His wife, Mindy, adds: “Once you’re in your thirties and forties, a pattern has been established–you need to start students out giving back while they are young!”

Annual giving ensures support for student scholarships, recruitment and retention of key faculty, research, technology and more. “The academics at UH are what really inspire me to give,” Swanson maintains. “You want to be proud of your education. I thought the University of Houston provided a great education for me.” Mindy adds, “Education is something that’s important to both Phil and me. We’ve made Houston our home, and in my point of view, having a thriving university is critical to having a great place to live.” Also, he says the University’s tireless aim at expansion and construction excites him about giving back. There are currently more than four new buildings being constructed around campus and 10 recently built or renovated facilities. The Energy Research Park is an impressive 70-acre structure, which he believes is going to be a huge part of establishing UH as the nation’s “energy university.” “Other folks can’t help but notice these things,” he maintains about the recent expansion. “Things that are happening now—these things are what inspire me to give.”

He knew that philanthropy would be an important part of his alumni experience ever since he pledged Sigma Chi during his freshman year. Whether it was the brotherhood that ultimately determined his sense of belonging on campus or the time he spent traveling as a Cougar cheerleader, he always knew that it was up to alumni to give back because he saw other alumni giving when he was a student. “I always figured I would be contributing myself one day—I learned about giving on the job,” he admits. The alarming reality is that, despite rising costs for higher education, tuition covers less than half the funds needed to educate a student. Educating a student at UH relies on 36 percent of contributions from sources other than tuition. Generous donations like those from Phil and Mindy bridge the gap, making it possible to continue providing an affordable, Tier One education.

Creating a habit of giving is important. No matter what the amount is, an annual gift is ultimately, a transformative one. For instance, twenty gifts of $20 each can purchase a guest lecture from a visiting professor. Charitable donations affect every student when they use library resources and technology on campus. In total, the 2012-2013 Cougar Graduation Challenge raised more than $30,000 for UH students and programs from more than 29% of graduating seniors!

The Treasurer of the Society of Women Engineers and President of Cougar Waterpolo, Catherine Finley, is an example of a May 2013 graduate who will be wearing a Cougar Spirit Cord at graduation. When asked what motivates her to give to the University, she answers, “Knowing that you’re helping others.” In addition to her donation, she also helped raise an extra dollar for her favorite college on campus, the Cullen College of Engineering, by completing a Graduation Survey. Because of yearly scholarships, including the Honors Scholarship and the Engineering Alumni Scholarship, Finley is able to graduate debt-free from University of Houston. “I really understand how donations from alumni relieve stress and let you just focus on school,” she says. And, after all, focusing on education is the most important job the University accomplishes.