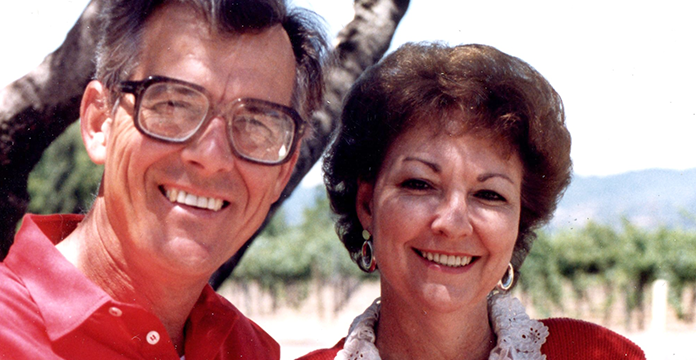 It’s not just the University of Houston birdhouse hanging in their front yard tree, or the Cougar Red Betty sports as she opens the door. It’s a pervasive attitude that includes calling Coach Yeoman a “hero” and President Renu Khator “remarkable.” It’s a love of UH that Frank and Betty Lemmon have that can hardly be equaled.

“I wouldn’t have a college degree without UH and the night classes it offered back in the late 1950’s and early 1960’s,” says Frank. “Hugh Roy Cullen envisioned the University as a ‘working man’s college’, and it was that. I worked fulltime during my bachelor’s degree and for years while I earned my master’s degree in education,” he reflects. “University of Houston is such a different school now. There have been so many positive achievements and the number of kids living on campus now is so high—it’s great to see!” He was not surprised to hear that UH is among one of the most residential campuses in Texas, with the second most beds in the state.

Frank’s gratefulness for his degree is palpable. He went on to become a teacher, then a respected administrator in the Klein school district. “The first week of the semester at night school, the parking lot would be so full,” he remembers. “In two weeks, you wouldn’t have that problem because students were missing class. It was tough, sticking it out and going to school at night after working all day as a draftsman at Transcontinental Gas Pipeline Corporation.” Frank looked longingly at the students playing cards in the Cougar Den on his way to evening classes, and knew he didn’t have time to join them. But that didn’t stop him. Besides, he had Betty getting his dinner ready before class, and she was helping him type essays, as Frank’s typing skills were less than stellar.

He got engaged to Betty at their high school senior prom, and they were married the following year. They’ve been together ever since. One of the things they have in common is that both are Life Members of the University of Houston Alumni Association, even though Betty didn’t attend school at UH. They are also members of the In Tempore Legacy Society (formerly known as the 1927 Society). “I’m glad they always made me feel like I was a part of the University,” smiles Betty.

The Lemmons have donated many gifts over the years. They have given to the College of Education, The Spirit of Houston Cougar Marching Band, the UH Alumni Association, The Honors College, the College of Natural Sciences and Mathematics (NSM) and are even season ticketholders for Cougar football. “We park right across the street from the new TDECU Stadium and tailgate!” says Betty. They donated a tree, in honor of both of their respective parents, to the esplanade on Cullen Boulevard and received a brick with their names on it from the old stadium before it was torn down. But the IRA Charitable Rollover is what is driving their giving right now.

Director of Gift Planning, Robert E. King, J.D., says, “The best part of the IRA Charitable Rollover is that it’s now a permanent option for donors. It takes the guesswork out of using your IRA for making gifts each year — that puts a lot of power in your hands as a donor.” He goes on to explain, “Many people who are coming up on their 50th UH reunion also are coming up on the 70 ½ year old minimum age requirement when the charitable rollover is allowed. This is a wonderful time for Golden Cougars, those who have been graduated for 50 years, to make a gift in commemoration of their milestone. What better way to show your support for the newly graduating class than to help other Cougars attain their dreams, or to honor a special professor or program?”

The fact that he is not taxed on his charitable donation to the University is a big selling point for Frank, who also gives this way to his church and other community organizations.

They are parents to two children and grandparents to three young people. Additionally, Frank enjoys reading and walking around his beautiful neighborhood in Spring, Texas. Betty loves to cook and to attend neighborhood block parties and functions. And amazingly, Frank still works! He retired in 2000 after forty years as a teacher and administrator, but still acts as a substitute administrator in Klein ISD.

The Lemmons certainly make a great team and are always rooting for UH. The permanent IRA Charitable Rollover is allowing them to give to the causes that matter to them most — and UH couldn’t be happier to have this couple among its Golden Cougars.