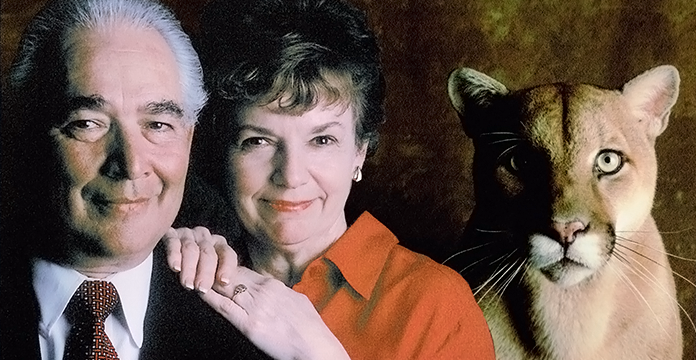 The University of Houston continues to garner national recognition in academics, campus life and athletics. In the past year alone, UH has added a chapter of Phi Beta Kappa, defeated some of the nation’s best football teams, and been recognized — again — as one of the nation’s most diverse campuses. And President Renu Khator has her eyes set on another leadership position for UH: the top spot for universities that receive matching contributions from ExxonMobil.

President Khator has identified an annual goal of $1 million to University of Houston from ExxonMobil Foundation’s Educational Matching Gift Program. That dream is more attainable than ever, as Exxon Mobil employees and retirees — along with the ExxonMobil Foundation — contributed nearly $931,000 in gifts and matches this past year. Such a substantial contribution is possible only through ExxonMobil’s industry-leading matching program, one which matches gifts three-to-one. The gifts must be made to an educational institution with which the donor has an affiliation and must be made for academic purposes.

In 2012, ExxonMobil contributed more than $650,000 to UH and the gift amount has increased every year. In 2015, seven donors maximized their match by giving $7,500, the largest amount that is eligible for the match. These gifts received a match of $22,500 for a total gift of $30,000. Together, these seven donors accounted for nearly 25 percent of the total received for the 2015 calendar year.

One such donor is Mr. Alfredo (Al) Vela (’62). Vela received his degree in communications and advertising from the School of Communications (now the Valenti School of Communications). He started a successful career in corporate communications that culminated with responsibility for Exxon’s public affairs operations. He and his wife, Mary Ann (’75), became extremely involved in their alma mater during the early nineties. He served as President of the Houston Alumni Organization from 1999 to 2000, acted as President of the Dallas-Ft. Worth Alumni Club and was a member of the National Advisory Council under former Chancellor Art Smith.

Over the years, Vela and his wife have given to numerous areas across campus utilizing their ExxonMobil match. One such program was the Scholars Community Program, which encouraged commuting students to feel more like they were a part of the campus community. “It has been remarkable to watch the progress of UH as a Tier One institution and all of its many achievements,” he says.

UH has consistently ranked among the top five universities for total dollars received from ExxonMobil’s matching program each year — out of the nearly 900 universities that receive funds from the program.

“The progress that has been made has been measurable and positive,” says Vela. “I’m just happy that Mary Ann and I are able to contribute in some small part by taking advantage of the ExxonMobil’s generous matching gift program.”