Join the University of Houston and President Renu Khator as we tour cities across the nation bringing you “Highlight Houston: UH Past, Present & Future” a celebration of UH’s proud legacy, the alumni who cherish it, and our bold march toward a boundless future. 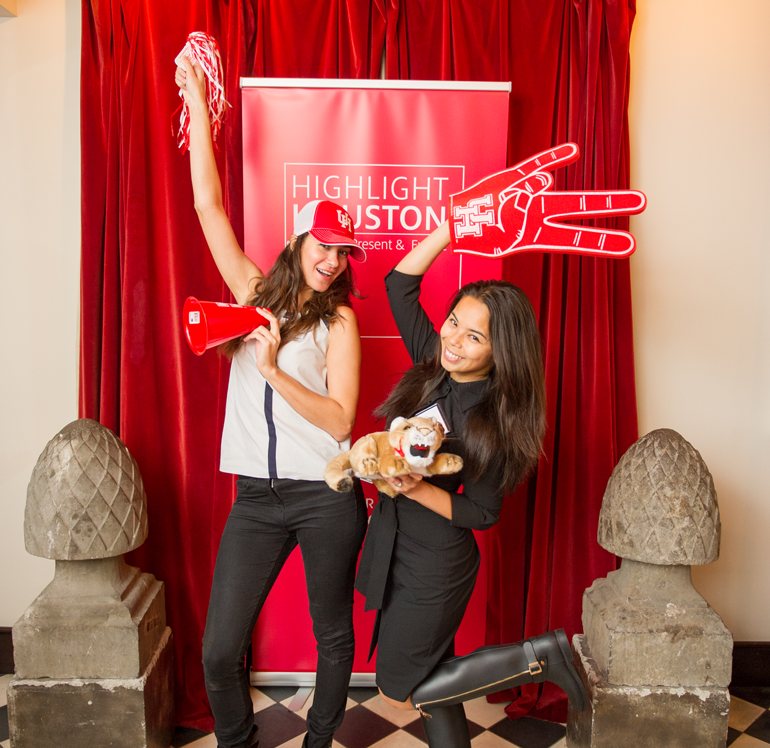 Christine Argao-Voutsinas (’05) is a native Houstonian, but it only took one visit to make her a New Yorker at heart. “A few of the girls and I had recently graduated from Bauer and the Program for Excellence in Selling, so it was a celebratory trip,” she recalls. Less than two years later, she moved to the city permanently.

Attending the Highlight Houston reception in New York on October 28 at Gramercy Park Hotel was a great way to get reacquainted with her alma mater. “I figured I should get up to speed, since so much has transpired since graduation — so many accomplishments, from the sports teams to Tier One status,” she says. “It was exciting to see and hear about all of the happenings on campus as it continuously expands.”

Always fostering a love of fine dining and hospitality, Christine began her UH tenure in the Conrad Hilton College of Restaurant Management. “I think growing up in Houston cultivates an appreciation for food — especially international cuisines,” she says. The courses at C.T. Bauer College of Business, however, proved to be more her speed.

Now, as the Assistant Director of Private Dining at Restaurant DANIEL, one of New York’s premier restaurants, she uses both of those skillsets. She coordinates charity galas and creates memorable milestone celebrations like birthdays, wedding and anniversaries. With celebrities and public figures dropping in on a regular basis, the tight-knit staff is always on their toes. “Chef Daniel consistently strives for beyond perfection,” she explains. “It’s a quality that can be stressful, but also contagious and addictive.” She also co-founded a personal shopping and wardrobe consulting company with her sister, PracticalPretty, which specializes in finding designer clothing and accessories for bargain prices.

That busyness is what made Christine’s two final years at UH the most enjoyable, when she was enrolled in Bauer’s Program for Excellence in Selling (PES), which she credits for building her foundation for sales, marketing and effective customer communication across markets. “Taking 15-plus credit hours, while dedicating your efforts to the PES program, all while working in a fine dining establishment will teach you some invaluable lessons in appropriate time (and stress) management,” she says. “I’m not exactly sure how I managed to juggle it all. Thank goodness that Starbucks in Bauer was built during my time!”

Memories of classes, campus and the city of Houston bound all attendees, no matter their graduation year. “I enjoyed meeting alumni from decades before and after mine,” Christine says. “It was definitely nice to find out there were so many other New Yorkers who shared my roots.”

See photos from the NYC Event