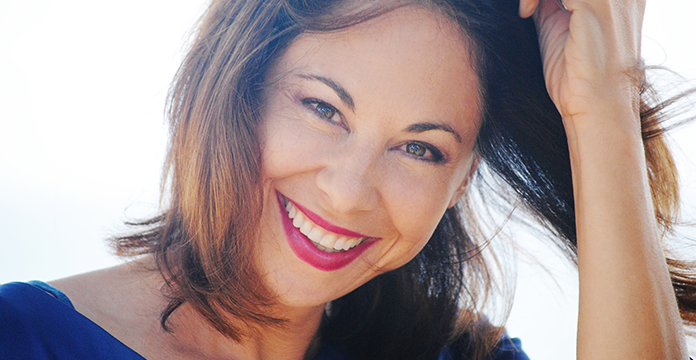 There was a strong sense of UH pride when Wendy Paris (’89) visited the University of Houston Honors College to discuss her new book, “Splitopia,” last month. As Dr. Chris Brunt (‘06) introduced her to the group of students gathered to hear about her new book and creative life, he recalled how he signed up, almost arbitrarily, to receive a mentor when he was an incoming freshman at the Honors College. Paris, who was living in New York at the time, was his assigned mentor. The mentorship grew into a friendship, which strengthened through “epic” email exchanges, and blossomed over the years. It’s amazing to realize that it started via one chance UH sign-up sheet.

Paris included a piece of her more recent correspondence with Brunt within the book, which she read aloud. “Over the years, we wrote our way through some crises,” Brunt explained to the audience. Those “crises” include Paris’ divorce from her husband, with whom she has one son: the subtitle of “Splitopia” is “Dispatches from today’s good divorce, and how to part well.” She describes the non-fiction book as one-third memoir, one-third journalism, and one-third research. In addition to her extensive journalism experience — her work has been published the New York Times, Psychology Today and the Guardian, among many others — Paris also brings her own personal experience as a child to the process; in addition to her own divorce, she recalls her parents’ divorce when she was five years old.

But, as she explains in the book through her “Seven Principles of Parting,” divorce does not have to be a wholly destructive experience for families. “I realized that I didn’t have the same negative view of divorce as my friends and so many others did,” she said, explaining her inspiration for the book. “I realized that it has been a huge part of my life and personal history.” She notes that while there are books about the legal side of divorce and the psychological side of divorce, hers is currently the only one that covers both angles, in addition to her own personal experience and interviews with 200 people in positive, post-marriage relationships. Though the book is well-researched, her background as a personal essayist drives the tone and approach of it. “I wanted to give a voice to the feelings that readers may be embarrassed or feel too vulnerable to talk about themselves,” she said.

While earning her M.F.A. in non-fiction creative writing at Columbia University in New York, Paris honed her skills in not only deciding what to include in her writing, but also what to leave out. “Writing non-fiction is about finding patterns, meaning and metaphor,” she said. “You have to decide, what does the personal say about the universal?” The question of what to include and leave out from her personal experience was a central challenge to writing “Splitopia.” One student asked if the writing about her divorce was therapeutic for Paris. She replied that it intensified the experience, for good and bad. Writing it in the moment allowed her to capture the intense emotions about divorce; if someone asked her to write the book now, she wouldn’t be able to.

Attending UH and the Honors College gave her a firm foundation in inquisitive thinking. After touring UH as a high school student with her father, she moved across the country from Michigan to enroll, motivated by a sense of adventure and intellectual curiosity — not to mention warmer weather. After graduation, her first job was as an arts reporter at KUHF-FM, and her knowledge was immediately put into play. “I felt, in a way, as if I’d majored in Cocktail Party Conversation,” she said. “This was not explicitly a work skill, but it let me feel comfortable in very erudite or sophisticated settings. As a journalist, I’ve had the opportunity to interact with highly accomplished people in all sorts of fields. The education I got in the Honors College really carried me through, and shaped my view of the world and our place in it more broadly.”

Paris also received a full academic scholarship from the Honors College, which cemented her desire to attend. “The scholarship also made me feel like the Honors College had faith in me,” she said. “They extended themselves to me — their trust in me as a student and thinker — and that fact made me want to work harder and prove them right.” Recognizing how it benefited her, she has become a donor herself. “I don’t want students to have the weight of debt over them,” she said. “I am very aware of the money I got from the school, and how valuable the education was. Graduating without student debt made me incredibly grateful.”

Since finishing “Splitopia,” Paris is helping couples in another way: through divorce coaching, “which is a form of life coaching,” she explained. “Coaching can help people connect with and remember their personal strengths during a tough transition, and really be the best, most compassionate version of themselves.” More books may be in her future as well: “I think it would be great to write a book about co-parenting, and how to have a fabulous second marriage!” While she explores the changing American family, she continues to support her UH family. She recalled how she felt as a new UH student: “I had the idea that college should be a stepping out into the world.” Now, like Brunt, she continues to hold the door open for the next generation of Honors students.