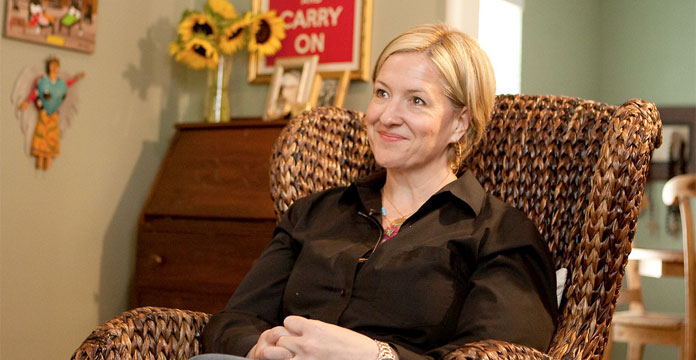 When she needs a reminder of why she has spent so much of her career on topics such as vulnerability and living wholeheartedly, UH social work professor Brené Brown looks no further than a favorite sculpture on campus.

The piece, titled “Sandy in Defined Space,” features a bronze woman, curled tightly in a box – an image Brown says reminds her of society’s need to categorize people in easy ways, not the most authentic ones.

“I think I used to live like that for a long time,” Brown said. “I used to want to have a really easy answer for what it is that I do … But I don’t really have a box anymore.”

Brown, an author and noted speaker who recently was featured at both the Houston and Kansas City TEDx conferences, says she likes to describe herself as a researcher, a writer, a teacher, a storyteller, a mother, a budding photographer, a sister and a daughter.

“I am a lot of different things,” she said. “It all comes down to trying to live and work and be who I am and learn more about people and why it is that we are so afraid to see and be seen as who we are.”

Brown sees being a teacher as one of her defining characteristics, in part because she incorporates elements of teaching in many aspects of her life, and in part because she has known since her junior college days that she wanted to take on that role.

“I had incredible teachers in junior college and professors in college,” she said. “I was so inspired that I always knew that was what I wanted to do – to be in a classroom and to teach at the university level.”

She found her academic home at the Graduate College of Social Work at UH.

“I went to visit the social work program, and it just felt like home,” Brown said. “I couldn’t believe it was a place where everything I wanted to do came together.”

She earned her master’s and doctoral degrees from the department, where she encountered “incredible teachers – the kinds of teachers that changed my life, they changed everything about me.”

Now, as a professor herself, Brown said she is thrilled to remain a part of the social work community.

“The Graduate College of Social Work is still a community,” she said. “That I get to be a part of it on the other end, as a professor, is incredible.”

Brown is one of only a handful of scholars who have taken on the complex subjects of shame, vulnerability and authenticity.

“The thing that I have learned is that vulnerability is at the center of fear and shame, but it is also at the center of joy and gratitude and love and belonging,” she said. “If we continue to wake up every day and put our game faces on and think that invulnerability is the way to be … then we pay the price, because I don’t know that we would ever fully experience joy and love and belonging.”

In her years of research, Brown has found that defining shame helps to dispel it.

“Shame hates to have words wrapped around it. If we talk about it, it loses its grip on us,” she said. “A lot of my work is about helping give people language to understand, to make meaning out of their own experiences.”

Because shame affects everyone, it is a topic of universal interest, and many people outside of academic circles are interested in Brown’s research. Her books, including “I thought It Was Just Me” and her forthcoming “The Gifts of Imperfection,” are geared to a wider audience.

“While a lot of my colleagues are pursuing grants and doing different things with their research, my commitment is absolutely about democratizing the information that I find,” she said. “I write books and speak a lot in public. So it has been very important for me to get my research out to a much broader audience than an academic audience.”

But even as she reaches out beyond academia, Brown still enjoys her role as an educator.

She also enjoys the relationship between the college of social work and the community.

“A lot of what I do is keeping very close connections with the people in this community,” Brown said. “I think our dean does that, and our faculty does that. That is what we are teaching in our program.”

The university’s Tier One push has only enlivened efforts at the college.

“One of the things I’m proudest about our college is that while the research is happening, while the grants are happening and the federal funding is happening, we are solidly committed to community engagement and teaching. That is at the heart of what we do,” Brown said. “In many ways, I think we are the ambassadors for the Tier One push, and I love that.”

“To be able to teach at a university that is so diverse, and that honors differences, and that tells people their stories matter because they matter is one of the greatest gifts of my career,” she said.