When you first saw the Cougar hand sign, what did you think it meant? Perhaps you thought people were making a “V” for “victory.” Maybe you thought you saw a “U” and an “H” for your alma mater with the three fingers that are held aloft. But the truth is, it took several decades and a huge rivalry between UH and the University of Texas (UT) to invent this sign!

The Cougar Paw’s origin dates back to 1953. While traveling to Austin, Shasta’s front paw was caught in the cage door and one toe was severed. Prior to the game, several opposing players and fans noticed the injury and began taunting UH players by holding up their hands with the ring finger bent to their palm, suggesting the Cougars were weak opponents. The Cougar faithful, remembering the defeat 15 years later, utilized the hand sign in a 20-20 tie in 1968 and believed it played a major role in the contest. When UH entered the Southwest Conference in 1976, the Cougars defeated the Longhorns in Austin, 30-0, cementing the rally cry for Cougars worldwide. Tradition tells Cougar faithful the paw is extended on the right hand to demonstrate unity amongst the University of Houston community. 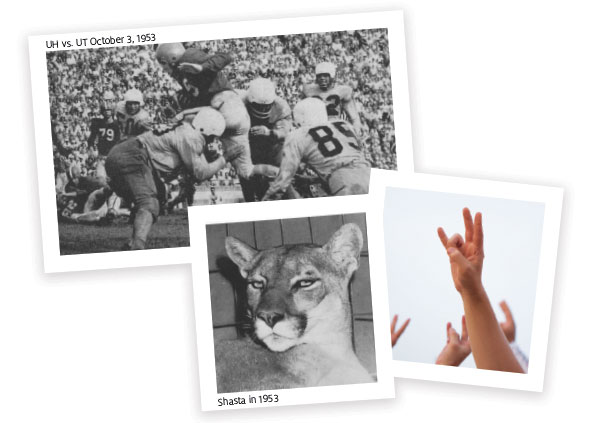