When you envision the University of Houston, what do you see?

With more than 266,000 alumni in the Cougar family, everyone’s perspective is bound to be unique. But no matter when you graduated, which college you attended, or whether or not you’ve been back to your alma mater since graduating, you are a vital part of our proud UH history.

The University of Houston was founded to educate Houston’s workforce, and that tradition holds strong today: but our accomplishments and growth have made our beloved institution into a global powerhouse. Today, the University of Houston is a major public research and teaching institution, serving more than 43,000 students in acclaimed undergraduate and graduate programs.

Our progress is clear: just a walk around campus, seeing new state-of-the-art residence halls and research centers and enjoying our award-winning, beautiful grounds, shows the progress our University has made.

Our alumni lead full lives with their families and careers, and we understand that stopping by campus isn’t always a possibility. We want to make sure that you appreciate the magnitude of how far our University has come since its founding in 1927. As you read this issue of Alumline, take a look at the timeline running throughout. Perhaps find the years you attended, and remember what it was like to be here at that time.

More importantly, take into account the value your UH degree has acquired as the University ascends in national rankings and prestige. We hope you will visit campus soon, but are just as honored that you proclaim your Cougar pride, no matter where you now call home.

E.E. Oberholtzer, the University of Houston’s founder and first president, heeded the call of a small group of eager and enthusiastic working-class high school students who sought higher education. On June 5, 1927, with a student enrollment of 232 and 12 faculty members, their dream began to take form with a few college classes held in downtown Houston churches and area schools.

Houston Junior College becomes a four-year institution, and is renamed the University of Houston.

UH moves to its own campus. Hugh Roy Cullen donates $335,000 to build Roy G. Cullen Hall in memory of his son. The land had been donated by J.J. Settegast family heirs and Capt. Ben Taub.

Frontier Fiesta — or as Life magazine has put it, “the greatest college show on earth” — kicks off its first celebration.

Two very important UH institutions were founded that we still love today: KUHT, housed on the UH campus and now a part of Houston Public Media, became the nation’s first educational TV station, and the “Cougar Paw” was born — read more about the history of the Cougar hand sign.

Head football coach Bill Yeoman begins his tenure at UH, holding the position for 25 years and eventually earning a spot in the College Football Hall of Fame.

The Cougar basketball team narrowly defeated the UCLA Bruins in “the Game of the Century” at the Astrodome. The game was the first NCAA regular season game broadcast nationwide in prime time, and paved the way for the “March Madness” we know today.

The Moody Towers open on the UH campus. Now, more than 8,000 students live on campus!

The Phi Slama Jama era of UH basketball under legendary coach Guy V. Lewis begins! Coach Lewis championed the “dunk,” which was previously outlawed, and he and players like Hakeem Olajuwon (FS ’84) and Clyde Drexler (’03)revolutionized the sport.

The football tradition “the Blaze” was born: every time UH scores, an oil field siren sounds.

Businessman Ted Bauer endowed and named the C. T. Bauer College of Business with a gift of $40 million. This is the largest up-front award to any single college in the history of the University.

A new age of Cougar spirit, excellence in research, and campus transformation begins!

UH becomes a Carnegie-designated Tier One public research university. Only 115 universities of America’s 4,700 institutions qualified for that prestigious designation in Carnegie’s latest report, including seven institutions in Texas.

Shasta VI was adopted by UHAA and went to live at the Houston Zoo.

The state-of-the-art TDECU Stadium opened on campus, ushering in a new era of UH football.

Brains and brawn are not mutually exclusive at UH! The University was inducted into the prestigious Phi Beta Kappa Honor Society, and the Cougars triumphed with a Chick-fil-A Peach Bowl victory.

The Here, We Go! campaign for the University of Houston kicked off with a $20 million gift from the John P. McGovern Foundation to the UH College of the Arts. In recognition of this transformational gift, UH will rename the college for former art student Kathrine G. McGovern (FS ’61). The Kathrine G. McGovern College of the Arts is the first college at the University named after a former student, and also the first named after a woman.

Join the Campaign for the University of Houston 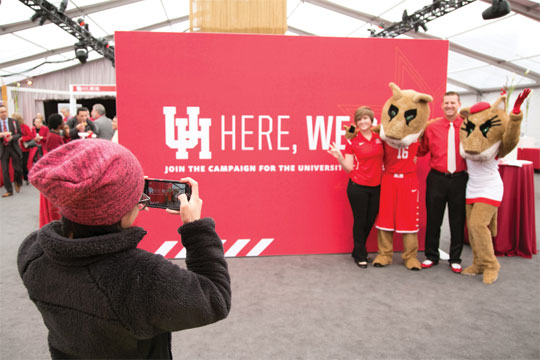 What is the meaning of “Here, We Go”? Your story and experience makes the phrase unique. Here, we go past expectations. Here, we go boldly. Here, we go for gold. Cougars are fueling, building and transforming Houston and the world, and that doesn’t stop after graduation. UH graduates are not only the lifeblood of the Houston area workforce and community: we’re making a difference all over the world.

To “go” means to create an unprecedented number of scholarships, so all hard-working students can afford a UH education. It means building new facilities like the Health and Biomedical Sciences Building II, the Indoor Football Practice Facility and new residence halls. It means that internationally renowned faculty and coaches will see our commitment to excellence in a new light. To “go” means to build up the University we love to transform the lives of all we touch.

Your support of the University of Houston is more important now than ever: alumni participation and support is vital to the success of the campaign, not only in raising funds, but showing the world that UH is a school we can all be proud of.