David Bertman and the Spirit of Houston 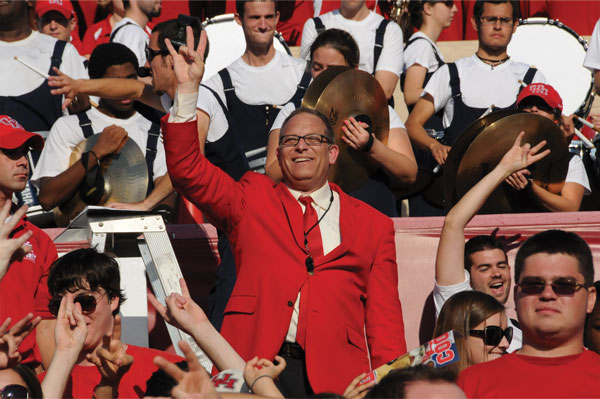 There is a long tradition of UH students working while they earn their degrees, and commuting to campus. But how many can say that they commuted to class via airplane?

David Bertman (M.M. ’98), best known on campus as the former Director of the Spirit of Houston Marching Band and now the Associate Dean of the Kathrine G. McGovern College of the Arts— not to mention a 2011 distinguished alumni award winner — was just that dedicated to earning his master’s degree in music from UH.

“I was the director of the marching band at Haltom High School in Haltom City, Texas for 14 years,” he explains. “They had a commuter flight to Houston, and I’d fly out at 5:30 a.m. on the days I had class.” That arrangement continued until graduation, and it wasn’t too long before he moved to Houston for good.

A native of Tonkawa, Oklahoma — “There were 54 students in my high school graduating class” — Bertman started playing piano at age five, and later took up French horn. Besides briefly entertaining the idea of being a business major in college, music was life. “I was called to teach,” he says, “and music became the vehicle I chose to help students move through life.” 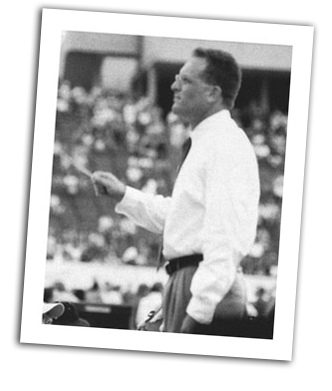 After receiving a bachelor’s degree from the University of Oklahoma, Bertman was determined to start his career as a band director in Texas. “The state of Texas is the best place for music education in band, choir and orchestra in the country,” he notes. He learned about UH’s Moores School of Music in 1987 from his friend Greg Hull (’77), a fellow educator whose UH roots run throughout his entire family. But he didn’t only take his friend’s word for it: “In 1987, I heard the wind ensemble from the University of Houston at the music educators’ convention in San Antonio. To this day, I’ve never heard anything like it in my life.”

He began taking private lessons with innovative UH music educator and conductor Eddie Green, and eventually enrolled as a graduate student while continuing to teach at Haltom. Now, having worked as a music educator for more than 30 years, he has had the same opportunity to make a difference in the lives of all his students. “What we do at UH is all about the success of the student, and empowering them to take a hold of their lives using whatever mechanism you have. For our college, that’s music and the arts,” he says. “I’ve seen a UH education change lives.”

Along with Dean Andrew Davis and the rest of the faculty and staff at the Kathrine G. McGovern College of the Arts, he has big plans for integrating the arts into the lives of all UH students and the greater community. “We are absolutely positive that the work we do as artists and as art educators, and the opportunities we have in the College to collaborate, will allow the arts the real power they have,” he says. “The arts have a capacity to lead, influence and impact society in a manner that is truly singular.”

Bertman’s UH advocacy includes an automatic monthly donation to UH, most of which is directed toward the UH Libraries in honor of his mother and grandmother, who were a teacher and a librarian, respectively. He cites former Dean of Libraries, Dana Rooks, as an inspiration in the beginning of his UH career. “She had just started her big campaign to renovate the library and the Honors College,” he recalls. “It inspired me, because if she could build that, then I could certainly build a marching band.”

And build it he did: Bertman has played a pivotal role in the celebratory Cougar spirit that we see on campus and beyond today. Just try to imagine a football game in TDECU stadium without the Spirit of Houston to get the crowd going, or a campus where students wear other colleges’ t-shirts. “In the beginning, I would buy Cougar football hats and t-shirts with my own money to hand out at football games!” he laughs.

But, he remains humble about his many contributions. “There’s a part of me that feels incredibly indebted to this University,” he says. “I owe so much to UH that I can never repay, but I will do my best.” Whether it’s as a teacher, band director, donor or tireless advocate, he is all about giving back and making a joyful noise for Houston’s university.